ZMA Productions is made of three ordinary guys who have a great respect and passion for Western Oregon archery hunting. Zac, Mike and Alex are the creators of what you see on this site today entitled, “The Beginning”. This has been a result of creative minds and months of hard work from our team as we use the talents and resources at hand to capture our hunts on film. The three of us combined possess years of experience in hunting Western Oregon Roosevelt elk and Blacktailed deer, and by working together we are able to share our experiences with you!

“The Beginning” is derived from the past two elk seasons, 2009 and 2010. Kicking off the 2009 season, Alex filled his elk tag as he was able to capitalize on a good Roosevelt bull elk just four days into archery season. Though he was finished with the early season, we stuck together as a team and proceeded to fill Zac and Mikes elk tags as well. Unbeknownst to us, this would open the door to a whole new passion.

On a cool windy morning before daylight, Zac and I were discussing our hunt for the day while hiking into an area where we had previously spotted a nice bull. Just as the sunlight crept into the easterly sky, I pulled out my digital camera used for photos and checked out the video settings it had. Though not the best quality, I was determined to have any encounters with elk that day on film. As we made our way to the first clear cut we spotted six elk making their way to the timber to bed. In order to cut them off we needed to move quickly along the timbers edge. As we moved into place, I turned on the camera and recorded our first footage of five cow elk crossing directly in front of us followed by a nice 5X6 bull. Zac came to full draw and quickly cow called in order to stop the bull. He paused only for a split second, seeing nothing of interest. The bull dove over the bank thrashing into the timber never presenting a clean shot. After reviewing the footage on the television at home over and over again, it was final. We were going to start filming! The next day we drove straight to Video Only and purchased our first digital video camera. Over the next two seasons we would do our best to capture footage of our hunting adventures only to learn how we can improve as hunters and videographers.

This entire process of filming our hunts has been an incredible learning experience for all of us at ZMA Productions. We have changed the way we look at hunting as there is an entirely new challenge of not only getting a clean shot on elk and deer, but successfully capturing the shot on film. This learning process of filming while hunting has sparked the title “The Beginning” for our first movie for one reason. It is where we started and we will only work to get better. Making films has been a great addition to our hunting and scouting as we have been able to incorporate it all into our first video. Whether it be trail camera photos or scouting trips to locate the elk, we capture it all.

Generating a video has not been easy and has presented us with many challenges. It is not the cheapest addition, nor does it make hunting easier. After completing the first few unofficial copies of the film, we were anxious to hear some responses about our project. By lending the film to people of all interests, much to our surprise, we received very positive feedback. Our goal at ZMA Productions is not to make a million dollars and continue to pump out videos following each elk season, rather spend quality time and money producing a film that makes you happy as a customer. We hope to recover some of the cost related to producing the videos, but ultimately want to share our adventures with people like you who share with us the passion of bow hunting.

We are not professional hunters or actors on any level, rather three ordinary guys who love the sport of bow hunting and the challenges it presents in this region of the country. From here we plan to purchase a high quality HD video camera and commit ourselves to bringing you the best possible footage at a reasonable cost! 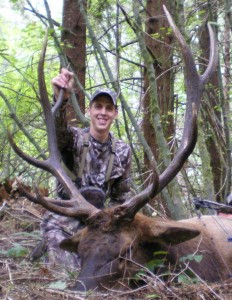 Zac was exposed to bow hunting at a very young age by influence of his father, Mike Cochran. In witnessing his father arrow a cow elk at 15 yards, Zac was hooked by the age of three. Over the next several years he would fine tune his archery skills allotting him much success as a young hunter. Zac loves the sound of screaming Roosevelt’s in late September and looks forward to the challenges that accompany each response. Thanking God for his talents, and his wife Olivia for supporting his passion, Zac has had much success in the sport. 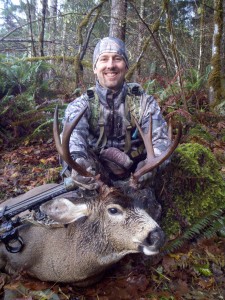 Mike has been blessed with a wonderful father and grandfather who has passed down to him their knowledge and skills of bow hunting. As true heroes in his life, Mike has learned firsthand from the generation of hardcore hunters. Having been in the woods with a bow and arrow for over 30 years, Mike has refined his ability to successfully hunt Roosevelt Elk and Blacktail Deer. He has a great wife Dianne, as well as two children, Felicia and Zac. Whether it is the smell of spring bear, the sound of September bulls or the chill of November black tails, it always means one thing: GAME ON!!! 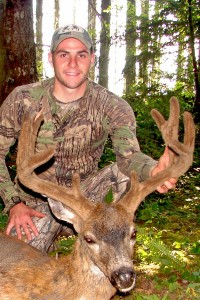 Born and raised in the heart of the Willamette valley, Alex has always found himself with a love for the outdoors. It wasn’t until he received his first bow at the age of 11 that his passion for archery hunting truly ignited. He enjoys the challenges of Western Oregon bow hunting, and the diversity within each hunt. Upon committing to the Engineering program at Oregon State University, his dedication to archery hunting has been tested. Balancing the responsibilities of school and hunting has been difficult, but his personal commitment to the outdoors has not wavered.